When we first went into this hike, we were not even sure if anyone hiked in New Hampshire around this time of year. So we looked for trails that people had done in one weekend in the middle of November. There were not a lot of results. Since this was also our first overnight hike ever, we needed something relatively easy as well. And that's when I came upon Philip Werner's blog post. It details his journey on a section of the AT which ends in a shelter. So the next step was gathering resources and planning.

It was November, so we knew that it would be cold. But honestly, we were not expecting record lows. We kept this in mind when going to REI. We bought sleeping mats to provide a little bit of insulation from the cold ground of the shelter.

Adam and I drove to pick up Matt at around 3am. The temperature was about 19°F. That meant on the mountain it would be much colder. The sleeping bag that I borrowed was rated for about 30°F. I'm not sure if that meant I would be uncomfortable or if I would die of hypothermia. I decided to err on the side of optimism and believed wearing extra layers to sleep would keep me alive.

I think that's part of the reason I liked doing this overnight hike so much. There were so many unknowns. And each variable would create a challenge that we had to overcome.

We started the hike at the Rattle River Trailhead parking lot. And we wanted to end at the Gentian Pond Shelter. 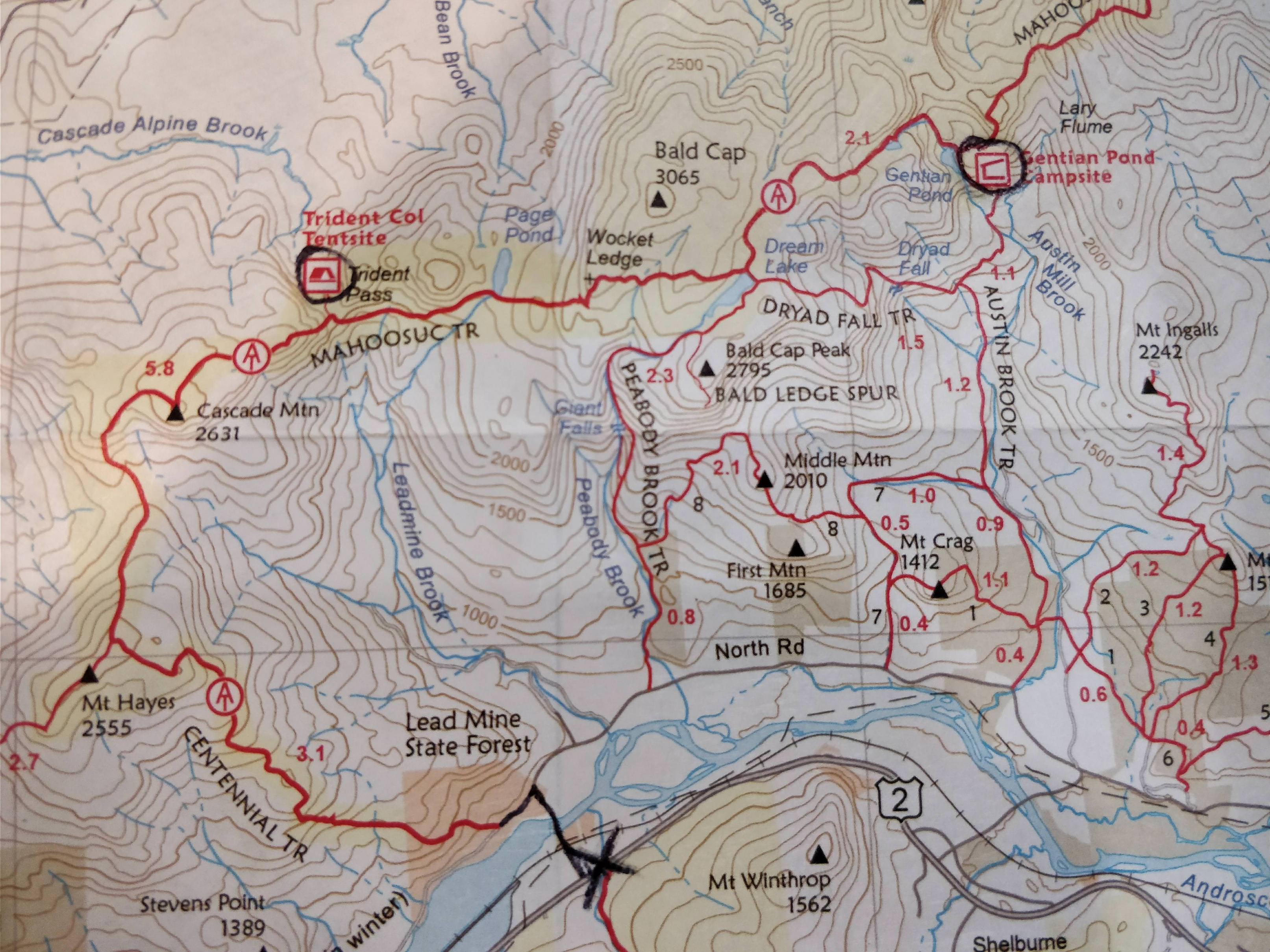 Originially, we had planned to take the AT(Marked by the circled A on the map) up to the Gentian Pond Campsite. This was a long 12 mile hike to the shelter with plenty of change in elevation. Taking the AT up there was a much longer route. And since we had limited daylight in November and were not sure of our pace, we decided to take the road about 3 miles up to Austin Brook Trail. This lead to a much more leisurely hike. Which was perfect for a first overnight hike. In fact, it was so leisurely that we decided to take a detour down Dryad Fall Trail to see if we could eat lunch at Dream Lake. Unfortunately we lost the trail as we were about 3/4 of the way there. Since we were running out of daylight, we decided to head back to the Austin Brook Trail.

As the sun was starting to set rapidly, we began to worry. We were on that sharp incline you see right before the shelter. To add a hurdle to our race against the sun, we arrived at a very confusing fork in the road. One sign just pointed a vague arrow up 500 foot ascent without any visible white blazes or clear path. The other lead further around the mountain, but with yellow blazes. We decided to trust the map and go up the sharp ascent. We also had a plan B. If we couldn't find the shelter before it got too dark, we would descend back down to the fork and set up our tents where the land was flatter. After an hour of climbing an almost vertical slope, we found the shelter perched on a ledge. Later, I realized that the vague arrow was in a specific font and piece of wood that indicated the direction of the Appalachian Trail.

The shelter was a nicely built wooden structure that was open to the elements on one side. There was a notebook that listed all of the shelter's visitors. There were some cool stories in there. I wish I had taken some pictures. We heated up some water to make ramen noodles. Then bundle up extremely well and tried to get some sleep. All of us kept waking up in the middle of the night because of how cold it was. I say "middle of the night", but the first time we woke up, we assumed there were only a couple hours until dawn. Turns out, it was 8:30pm! We had only slept for a measly 3 hours. If we were going to stay alive, we would need to last the whole night.

Because of the cold, we did not feel very rested when the sun rose at 6:30AM. As a result, we took the same route down that we did coming up. We didn't want to take a chance getting back to Boston super late. After all this hiking, we still had a 3 hour drive ahead of us. The hike back was uneventful. The drive back was super scenic. We drove through a narrow valley in between the White Mountains; an opportunity we missed on the way up since we were driving through the early morning darkness.

Thank you Philip, for making the unknown a reality!

Here's an image and video dump of the trip.